My dear friend and colleague at the Kettering Foundation, with whom I edited the Kettering Review since 1991, passed away on August 20 at the age of 87. Snatched too young. 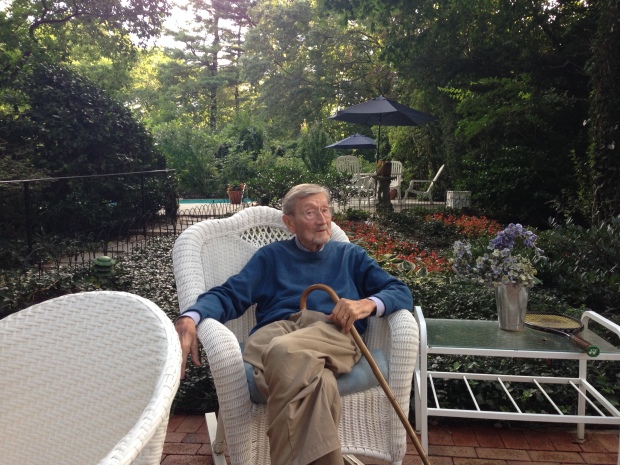 I took this picture in the summer of 2015, at the home he shared with his wife Carol Vollet Kingston. The Kettering Foundation has posted tributes to him here.

In the fall of 1988, when I was doing freelance work in Washington, DC, a friend called me at my row house in Adams Morgan to say that I was about to get a call from a Bob Kingston who was looking for a writer to work with something called the Kettering Foundation on something about democracy.

Sure enough, a few minutes later, sitting on the wooden staircase, I got a call from this very distinguished gentleman, speaking with a British lilt, with a tad of wry irony, about democracy and the foundation’s work—which all seemed rather vague but well-meaning—and would I meet him the next Tuesday, he asked, at the foundation’s Washington office?

I don’t really remember what he said at that Tuesday meeting but I distinctly remember him piling a stack of Kettering Reviews in my arms on the way out. A few days later I was flown to Dayton to meet with the president of the foundation, David Mathews, who took me on a tour of the foundation and then at the end of the day gave me an assignment to revise a speech of his for publication.

I seemed to be interviewing for something, but I had no idea what, nor did I know that this odd new-not-really-a-job job would be the most significant one of my entire life, that it would involve working out ideas with these people over many long meetings that I would almost always find fascinating, spirited debates over drinks and dinner about politics and public life, frequent ‘memo wars’ about things like virtue and purpose, and a far flung network of intellectuals and democratic practitioners all over the world.

A couple of years later, the lovely poet who had been Bob Kingston’s associate editor for the Review, Judd Jerome, passed away. And then Bob asked me if I’d like the job. Little did I know that this would be a role that I’d keep for the next 23 years, working with Bob issue by issue to say something that would help the foundation both with its own work and with its intellectual outreach. All the while I hoped that I’d never get promoted—for a promotion could only arise if something bad happened to Bob.

So I was not at all happy when two years ago, as Bob’s health began to fail, that I was promoted to coeditor. And now with his loss I find it surreal to be the sole editor. Yet, now when I take my pen to paper to mercilessly edit something for the Review, I mimic the curving lines he’d use to excise whole paragraphs; I try to link together the remaining words into the more concise little essay that the piece was waiting to become under Bob’s hand; I hope to carry on a bit of his brilliance.

The latest issue of the Kettering Review, a journal I co-edit for the Kettering Foundation, is now available for free online here. It includes pieces by Iris Marion Young, Daniel Yankelovich, E.J. Dionne, Vaclav Havel, and other luminaries.

To get a sense of the overall issue, here’s the start of my editor’s letter:

Over the past 60 years, the fortunes of democracy have been tumultuous. In the mid-20th century, dozens of countries in Asia and Africa won their independence from colonial rulers; but shortly thereafter the Cold War polarized the world for decades. Nixon’s 1972 trip to China pointed to an end of a 25-year estrangement between East and West, but it took another decade for this to move forward. In 1980, Polish workers in the Gdansk Shipyard formed the labor union Solidarity, which opened up the possibility that authoritarian goverments might meet their match in public dissent. Mikhail Gorbachev’s appointment as leader of the Soviet Union in 1985 led to Perestroika and Glasnost and the hope for some kind of global rapprochement. And one day in November 1989, a German bureaucrat haplessly announced the opening of a passage in the Berlin Wall from East to West, which within days led to the utter destruction of that edifice that had divided the world in two. Since then and continuing through today, ancient enmities have flared even as new democratic governments form and falter.

For the past 30 years, Kettering Review has chronicled many of these journeys. Just as Carol Vollet’s painting, Approach Blue, which we are delighted to feature on this issue’s cover, points toward a bright spot in the midst of tumult, we have tried to identify those elements that are so central to democratic self-governance. Over the years we have taken as our point of departure the question, “what does it take for democracy to work?”—not just here in the United States but throughout the world. As a “Review” we have published pieces old and new, taking liberty to bring the words of Aristotle, Dewey, and Arendt to these pages, just as we have published new pieces by many of democracy’s living philosophers and practitioners. We were publishing during the last years of the Cold War when many thought that if only communism would end then democracy would prevail. But in the past 25 years we’ve found that democracy raises more questions than it answers: Who are the people? How do they organize themselves as a public? What kind of power and knowledge can they have?

I spent part of yesterday and today in meetings at the Kettering Foundation thinking about media and democracy. These conversations still, to my chagrin, keep getting tangled up with the debate about old school journalism versus new media.  I’ve blogged about this debate before. But I keep coming back to these meetings because I think that something incredibly promising is happening in this new media environment.  But it won’t happen inevitably; it won’t happen because the new technology just makes it so; it won’t happen unless we discern and aim toward using these new media to create a better environment for democratic politics.

Here’s where I think we need to go next.

First we need to understand that publicly relevant journalism is not beholden to any particular medium — not print, radio, TV, or web.  Publicly relevant journalism is reportage that links information with value. By that I mean linking what the facts are on any given matter with what people’s and communities’ concerns and aspirations are.  Good journalism never just reported what happened.  It reported on how what happened matters to us.  Events matter to us because they impinge or constrain or open up possibilities for us achieving things we care for. This kind of journalism can happen in a newspaper as well as on a blog.

Second, we need to get over this distinction between professional journalism and citizen journalism. It was a twentieth century economic circumstance that gave rise to the penny press (see James Carey on this) and the very model of professional, disinterested journalism. In the last decade or so, two phenomena have converged: (1) the old business model for print journalism cratered and (2) digital media made analogue media obsolete.  Phenomenon 2 certainly exacerbated phenomenon 1.  But it didn’t cause it!  Well before web 1.0 or web 2.0, newspapers were in crisis.  Ten years ago we lamented that two newspaper towns were becoming one newspaper towns.  Now we lament that there are towns without any newspapers at all.  Old-school journalism wants to blame the web.  But the blame lies elsewhere.

Third, we need to understand what drives demand for good journalism.  In today’s meeting, Dan Gillmor made the good point that the old model of journalism was about manufacturing a product (a news article) and distributing it to the passive masses. The old model, which sent news out to people,  trained people to be passive consumers. Now with new media, Dan argues, we have plenty of content but poor demand for good quality since people are trained to wait and settle for whatever news comes at them.

That’s a good point.  But Rich Harwood and I countered that it is not a matter of ginning up demand for better news but creating conditions under which citizens can engage.  As I see it, people aren’t going to seek out good journalism unless they see their own connection to it.

The dominant political culture of the twentieth century trained citizens not to bother with matters of widespread, common concern.  Their officials would take care of it. If their officials didn’t, well then just bitch and moan until they did.  Nary was there a message that common problems call for common deliberation and action.  So we just started delegating it all to officialdom.  This is a recipe for apathy/outrage (two sides of one coin) not engagement.

In that kind of context, why should anyone bother reading the paper?  Why should I bother reading about matters of common concern when what I think about it doesn’t matter at all —  and when I have even less chance to make a difference?

Hence, fourth, and finally for this post, relevant journalism, whether it happens on the web or in print, needs to embedded in a culture — or help create a culture — that sees members of political communities as political agents.  One of or guests in today’s meeting, Jeremy Iggers, who helped found the Twin Cities Daily Planet, has been focused on creating a new platform with just this task. With him, we have to start treating people as actors rather than as consumers and audiences.  Good journalism calls for political transformation.  Not only that, sustainable journalism calls for this. Perhaps in another post I’ll document the places and cases in which media that actually connects with communities’ democratic capacities becomes economically sustainable. Folks will pay for news when it matters to them — and when the political culture considers that what they think does indeed matter.

I’ve just come off of an amazing three-day meeting convened by the Kettering Foundation: the Deliberative Democracy Exchange.  There were about two hundred participants from all over the world coming together to exchange thoughts and think through little-d democratic politics, a politics that’s about deliberation, engagement, and civic agency.  I like to describe democracy as the opportunity for all who are affected by public matters to have the ability to shape their world.  That’s pretty basic, but still a lot to hope for.

Last night there was a panel of speakers form Latin American, Africa, the Middle East, Southeast Asia, and New Zealand who talked about the state of democracy in the world today.  I was struck by the Columbian who said to America, keep your money, help us build civil society.  And I was especially struck by the Jordanian, speaking for the Middle East, talking about why it has been so hard for the Arab world to become democratic.  There are internal and external factors, he noted.  Internally there was the problem that various Arab regimes seized on the Israel problem as an excuse for forestalling democracy. Externally there was the problem that the best beacon for democracy — the U.S. — was modeling anything but democracy in the Middle East, by supporting dictators and brutal regimes, by waging an endless war, not supporting peace.  I got the message from all that the United States is still a country that others in the world admire and love for its values; they just wish the U.S. would start living up to them.